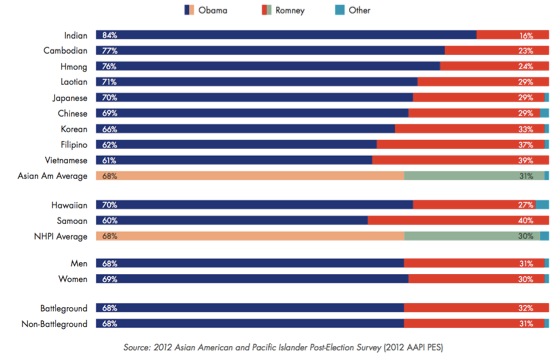 Asian Americans and Pacific Islanders, two of the fastest-growing demographics in the U.S. are open to persuasion by either major party at the ballot box, a new survey released today revealed.

The findings in “Behind the Numbers” are the result of a survey that interviewed approximately 6,600 AAPI voters in 11 languages after Election Day sponsored by Asian American Justice Center (AAJC), Asian and Pacific Islander American Vote (APIAVote), and National Asian American Survey (NAAS).

Among the significant findings: two-thirds of Asian Americans and Pacific Islanders voted for President Obama, yet about half are independent or do not think in terms of political party.

The survey also found that language proficiency made a tremendous difference, both in terms of partisan profile and the presidential election. For example, the survey found that national polls conducted only in English might have underestimated the vote share for Mitt Romney. Notably, however, Obama won every segment of the AAPI vote, including 61 percent Vietnamese voters-a group that traditionally voted Republican.

The report was an important milestone in surveys of Asian Americans and Pacific Islanders because it was conducted in nine Asian languages including Laotian, a first for a national public opinion survey.

“The survey results also revealed the importance of conducting surveys in Asian languages to get accurate results,” said Terry Ao Minnis, director of census & voting programs of AAJC. “Ensuring that legally required language assistance is readily available and easily identifiable at the polls is imperative to safeguard our communities ability to exercise fully their constitutional right to vote.”

Given its representative national sample, the survey also provided conclusive evidence on partisan and nonpartisan voter engagement efforts in battleground states and in the rest of the country.

“The study confirmed that community organizations played a major role in mobilizing Asian American and Pacific Islander voters and stepped in where the Democratic and Republican parties were absent,” said Christine Chen, executive director of APIAVote. “The parties and other voter mobilizing organizations must invest in linguistically and culturally appropriate outreach to engage our communities for future elections.”